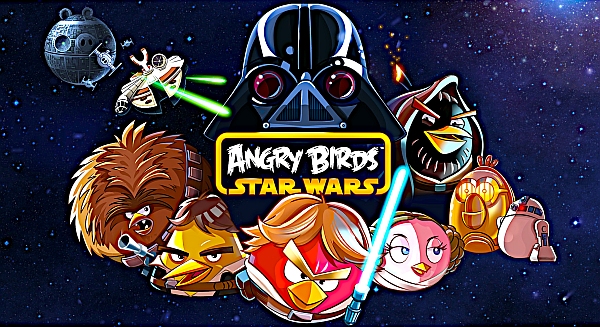 Angry Birds Star Wars was released on November 8, 2012. Merchandise related to the game was released on October 17. The game is a crossover with the Star Wars original trilogy, and casts the Angry Birds as the Rebels and the Pigs as the Empire.
Angry Birds Star Wars is a puzzle video game, a crossover between the Star Wars franchise and the Angry Birds series of video games, launched on November 8, 2012, first for Windows, iOS and Android devices, later also to Mac and BlackBerry. The game is the fifth Angry Birds game in the series. The characters are copyrighted from George Lucas’s double-trilogy. On July 18, 2013, Rovio announced that Angry Birds Star Wars will be heading for the PlayStation 3, PlayStation Vita, Xbox 360, Wii, Wii U and the Nintendo 3DS on October 29, 2013 in conjunction with Activision. As of August 2013, the game has been downloaded over 100 million times on its various platforms. The game is a launch title for the PlayStation 4 and Xbox One.